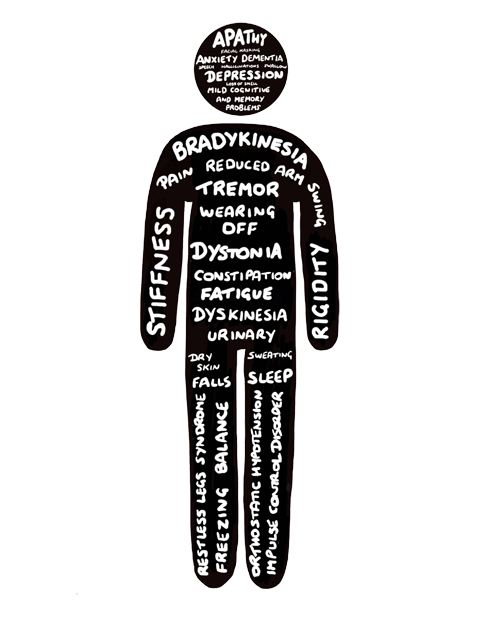 Parkinson’s disease (PD) is a neurodegenerative condition – an illness that affects nerve cells in the brain that control movement. Parkinson’s is progressive, which means symptoms appear gradually and slowly get worse. It is named after James Parkinson, the London doctor who first reported the symptoms in 1817.

Parkinson’s affects people of all races and cultures. Around 10 million people have the condition worldwide – that’s less than one percent of the total population. Most people who get Parkinson’s are over 60, but one in ten are under 50. Slightly more men than women are affected.

Everyone with Parkinson’s has different symptoms, but the most common symptoms are tremor, muscle rigidity and slowness of movement. All of these are related to movement and are called motor symptoms. Many people with Parkinson’s also experience other problems not related to movement, such as pain, anxiety and depression. These are called non-motor symptoms.

Our movements are controlled by nerve cells (neurons) in the brain which pass messages to one another, and to the rest of the body, using chemicals called neurotransmitters. An area of the brain called the substantia nigra produces one of the neurotransmitters that controls movement: dopamine. In people with Parkinson’s, 70-80% of dopamine-producing cells gradually deteriorate and are lost – this is called neurodegeneration.

The loss of dopamine-producing neurons results in low levels of dopamine in the part of the brain that controls movement and balance. When nerve cells do not pass on brain messages properly, movement is no longer controlled smoothly and the symptoms of Parkinson’s appear.

As yet there is no cure for Parkinson’s, but there are many things you can do to positively influence the course of the disease and enhance your quality of life. Maintaining a positive approach seems to slow down the progression of symptoms and helps you to stay in control.

Parkinson’s is life-altering, but not life-threatening. Some of the more advanced symptoms may make you more vulnerable to infection, but for most people, Parkinson’s will not significantly reduce life expectancy.

To date, no global studies have been conducted to reliably ascertain the number of people who have Parkinson’s. It is therefore possible only to estimate the worldwide prevalence of the condition.

A 2015 Global Burden of Disease Study estimated the prevalence of Parkinson's to be approximately 6.2 million people worldwide but in reality, the figure may be considerably higher as we know that many people go undiagnosed.

As the incidence of Parkinson's rises significantly with age, and people are living longer, the prevalence of Parkinson's is set to rise dramatically in the future. The Global Burden of Disease Study 2015 estimates that there may be nearly 13 million people with Parkinson's by 2040.

Various prevalence studies are listed below.