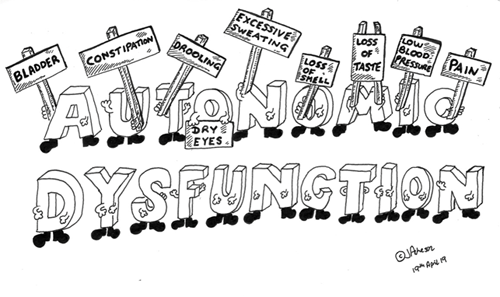 The autonomic nervous system regulates the function of many organs and so controls the following:

When the ANS fails to work properly it is called autonomic dysfunction.

Autonomic dysfunction often occurs in Parkinson’s due to the loss of dopamine-producing cells and the presence of microscopic protein deposits called Lewy bodies in the brain. As a result, a number of non-motor symptoms may be experienced. Research suggests that the peripheral nervous system may be affected long before such symptoms appear.

If autonomic dysfunction is severe, atypical parkinsonism, such as multiple system atrophy (MSA), should be suspected.

Please click on the links below for information on individual symptoms related to ANS dysfunction:

Scientists now recognise that many medications used to treat Parkinson’s can affect the ANS and so make symptoms worse. It is important to monitor your medications and symptoms so that you can discuss these with your doctor. He or she may then be able to adjust medications to reduce the impact on the ANS and so improve symptom control. See Keeping a diary for more information on this and how it can help.

Research suggests that about 90% of people with Parkinson’s experience autonomic dysfunction which may considerably reduce quality of life.

We would like to thank Prof Jorik Nonnekes (Radboud University Nijmegen Medical Centre, The Netherlands) for his help in reviewing this information.

DLB is caused by the build-up of microscopic protein deposits called Lewy bodies in the brain. These are linked to the death of nerve cells, or neurons.

At first you may be prescribed only low doses of medication. Or your doctor may suggest you delay taking medication until symptoms increase.