A loss of the sense of smell, or an impairment, is known as hyposmia, anosmia, olfactory deficit or olfactory dysfunction. 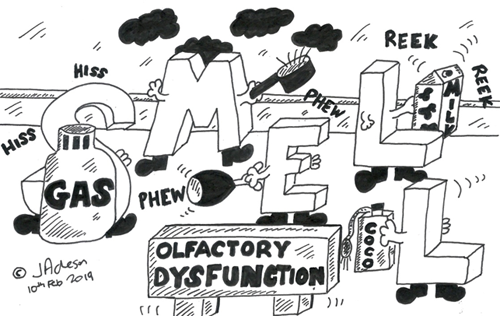 Motor symptoms appear only when 50-60% of the dopamine-producing cells are lost in the substantia nigra area of the brain. Studies have shown that the pre-motor phase (the time before motor symptoms appear) lasts around five years or more and it has been estimated that in some cases smell loss may occur up to 10 years before Parkinson’s is diagnosed. It is during this pre-motor phase that early changes in the brain could potentially be detected if very early symptoms such as loss of the sense of smell were identified. It is therefore thought that screening, using reliable smell tests before typical motor symptoms are obvious, could help with the early detection of Parkinson’s or identifying those at higher risk of developing the condition.

Reliable smell tests are important because loss of smell often remains undetected and is usually gradual. Early detection of changes in the brain is important as this can help scientists understand the causes of Parkinson’s and develop better treatments, including neuroprotective strategies which aim to slow or prevent the development of the condition. In order to maximise the potential of such strategies they need to begin as early as possible in the course of the disease, so a reliable smell test could be invaluable in contributing to early diagnosis and prompt neuroprotective treatment.

Exactly why sense of smell is impaired in Parkinson’s is not completely understood. Many believe that it is related to the protein alpha-synuclein which clumps in the brain of people with Parkinson’s. These clumps have been found to occur in the area where smell is first processed in the brain (the olfactory bulb) as well as in the gastrointestinal system. In fact, a well-known study2 concluded that the olfactory bulb is where alpha-synuclein clumps first appear before migrating to other parts of the brain. If this theory is found to be correct then researchers may be able to find clumps and break them up before they reach the brain and cause major damage.

There is currently no medication to help regain any loss in the sense of smell in Parkinson’s, although one study3 in people who had received deep brain stimulation showed a slight improvement. Researchers think that the small improvement is probably because the stimulation affects the cognitive processing of information relating to with smell.

Researchers are keen to establish whether or not a smell test is a reliable indicator for identifying individuals with pre-motor Parkinson’s, that is, who currently show no signs of Parkinson’s but will go on to develop the condition. In the same way that detecting heart disease can help to prevent heart attacks, it is hoped that knowing there is a high risk of Parkinson’s developing will allow time for preventative, neuroprotective action to be taken before it is too late.

Loss or reduced sense of smell requires some additional precautions according to individual circumstances. These include:

We would like to thank Prof K. Ray Chaudhuri DSc FRCP MD (King’s College London and King’s College Hospital, London, UK) for his help in reviewing this information.

Every case of Parkinson’s is different and not everyone experiences the same symptoms. For example, not all people develop tremor and for some, rigidity is the major symptom.

Slowing down or stopping the process of neurodegeneration remains one of the most important goals of current Parkinson’s research.

If medication does not adequately control symptoms, in carefully selected cases deep brain stimulation (DBS) may be recommended.