Developed by the My PD Journey multi-stakeholder coalition, the Parkinson’s Disease Composite Scale (PDCS) is a simple rating scale to be used primarily by neurologists and other healthcare professionals familiar with Parkinson’s that measures the severity of symptoms experienced by people with Parkinson’s in a timely way.

Most existing rating scales used by neurologists currently explore different aspects of the condition, but do not offer a comprehensive view of a person’s condition quickly. The development of the new PDCS, led by Professors Fabrizio Stocchi (Italy), Fabiana Radicati (Italy) and Pablo Martinez Martin (Spain), was therefore urgently needed as it combines motor symptoms, non-motor symptoms and treatment-related complications; it is also simple and relatively fast to use. 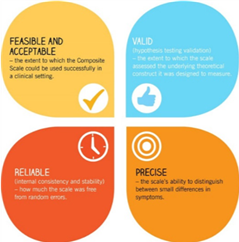 The PDCS was made possible by funding support from AbbVie, Britannia Pharmaceuticals, Medtronic, Teva and UCB.

The PDCS assesses the severity of the most frequent and difficult symptoms of Parkinson’s as follows:

Motor symptoms are examined at the time of evaluation by a healthcare professional. Non-motor symptoms and treatment complications are evaluated for severity based on the patient’s experience over the two weeks prior to the assessment.

Throughout the scale, five severity levels anchor each item: absent, mild, moderate, severe, and very severe. While a score of 0 is considered the absence of the specific disorder, some items range from 0 to 4 and others from 0 to 7 to account for the different levels of impact each symptom has on the patient. A total score can be calculated for each domain by summing its component parts, and a total score for the PDCS can be calculated by summation of the domain scores.

The PDCS is free to use and disseminate, provided you comply to some simple guidelines.

Please email info@parkinsonseurope.org to give us your feedback or if you are interested in using the PDCS in your practice.

Benefits of using the PDCS