Bladder difficulties, especially incontinence and difficulty emptying the bladder, may be experienced in Parkinson's, particularly in the later stages of the condition. 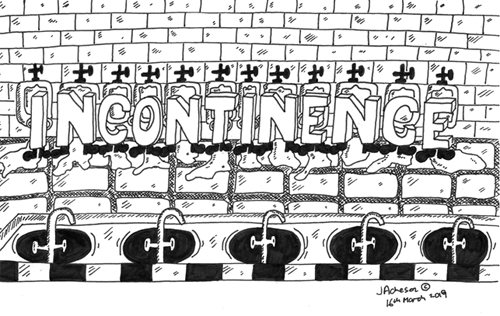 The bladder has two main roles: to store urine produced by the kidneys, and to periodically eliminate urine from the body. The bladder expands like a balloon and the individual experiences signals that the bladder is becoming full. As it continues to fill, more urgent signals are sent announcing the need to urinate. The bladder can hold around half a litre of urine and on average, a healthy person urinates four to six times a day.

The sphincter muscles around tube leading out of the body from the bladder called the urethra maintain a watertight seal and most people are able to delay emptying and can choose when to go to the toilet. When you are ready to urinate, your brain sends a signal to the bladder, telling it to contract. At the same time, the sphincter muscles relax, allowing urine to pass from the body.

The control of bladder functions is very complex and sometimes, for a variety of reasons, bladder (urinary) problems occur. These are common in the general population at all ages and may include:

Urinary incontinence can be further classified as:

These difficulties can be very embarrassing and may significantly impact quality of life.

Bladder difficulties can be common in Parkinson’s, particularly in the later stages of the condition. The loss of dopamine and the resulting interruption of signals from the brain can mean that messages telling the bladder to retain or expel urine are disrupted.

However, it is important to stress that bladder problems are not inevitable in Parkinson’s. If difficulties do arise, especially in older people, they may be caused by factors totally unrelated to the condition, so a thorough medical evaluation should be carried out with any appropriate tests.

Bladder problems associated with Parkinson’s include:

It is important to discuss any bladder difficulties, including those listed below, with your doctor, even if this may appear embarrassing. Your doctor will then be able to properly assess and treat any problems, for example:

It may be helpful to write notes to discuss with your doctor, for example, the type of difficulties experienced, their frequency, when you first noticed a change, and your normal eating and drinking habits.

Bladder problems can occur for a number of reasons, so the first approach will be to eliminate causes other than Parkinson’s, such as urinary infections and prostate problems in men.

Often a doctor will avoid bladder-specific medication initially while he or she investigates whether diet, drinks, bowels, mobility, toilet environment and optimising Parkinson's medication can affect, and improve, your bladder function.

There are many things you can do to help overcome bladder problems. Many are very simple, such as changes in the set-up of your bathroom, the use of practical aids and changes in your daily routine.

Exercises of the pelvic floor muscles are useful in preventing stress incontinence, and may also help with managing urgency incontinence. These muscles, which stretch from the pubic bone at the front to the tail bone (coccyx) at the back of the body, are like a trampoline and work to support the bladder and bowel, as well as the womb in women. They can become weak for many reasons, including childbirth, lack of exercise, hormonal changes and ageing, and this can cause urine to leak, particularly when coughing, sneezing, laughing or exercising.

Pelvic floor exercises can strengthen the muscles and so help control the bladder and prevent urine leaking. The following suggestions may help you to effectively do pelvic floor exercises on a daily basis, although it must be stressed that everyone is different and so each individual must find an exercise pattern to suit their own needs. A physiotherapist will be able to advise further.

When performing the exercise, make sure you don’t tense your buttocks, bring your knees together, hold your breath, or lift your shoulders, eyebrows or toes upwards as you do them. If you do, your muscles will not be contracting correctly and the exercise will not be effective. Breathing correctly and releasing the muscle to the basement floor after each hold is very important.

As you practice this each day, aim to squeeze harder to take the lift higher, and to hold the lift for longer at each floor. Increase the number of ‘lifts’ you do each time, but remember to rest between sets of squeezes. You may find it helpful to count and record how long you can hold for and how many squeezes you can do so that you can see your progress.

Try to build these exercises into your daily routine – ideally five times a day - and also use them whenever you think you may be about to leak urine, particularly if you are about to sneeze or cough.

In Parkinson’s, many incontinence problems are caused by difficulties with the practicalities of going to the toilet. An incontinence advisor or an occupational therapist can assess problems and advise on ways to overcome these. They may suggest, for example:

People with bladder problems often try to restrict the amount they drink because they worry about needing to go to the toilet. This is understandable but it is important to drink approximately eight to ten cups of fluids (1.5 to 2 litres) each day in order to expel waste products efficiently. Taking plenty of fluids during the day whilst restricting fluid intake during the evening, especially an hour or so before bed-time, can help.>

Caffeine, which is found in tea, coffee, cola and some other fizzy drinks, can irritate the bladder and so ideally should be avoided if possible.

Alcohol, particularly 'long' drinks such as beers and lagers, can make incontinence problems worse so try not to consume too much, especially if you are not in a position to access a toilet easily and quickly.

If bed-wetting is a problem, it may be helpful to set an alarm clock for a couple of hours after you go to sleep so that you are woken up to go to the toilet. You may need to experiment to find the best wake-up call time and it is wise to vary the alarm time as this will stop your bladder from becoming accustomed to emptying regardless of the time you go to bed.

Special alarms, known as enuresis alarms, are also available. These are designed to wake you either with a sound or by vibrating when urine starts to leak. Gradually your body may become accustomed to holding urine or waking you automatically so that you can go to the toilet.

Your doctor may adjust Parkinson’s medication as sometimes this can help. Medications may also be prescribed to:

Intermittent catheterisation may be recommended if the problem is failure to empty the bladder and a significant amount of urine remains in the bladder. This involves inserting a hollow tube into the urethra to drain urine away from the bladder.

Surgery may sometimes be suggested to treat stress incontinence and prostate problems.

We would like to thank Dr Jalesh Panicker (University College London Hospitals NHS Foundation Trust) for his help in reviewing this information.

Exercise is important for everyone but this is particularly true if you have Parkinson's because muscles and joints can become stiff and weak as a result of your symptoms.

Parkinson’s affects everyone differently, but for women there are some aspects of life that need particular consideration.

The bowel is a term used to describe the small and large intestines. It is a long, tube-shaped organ that is responsible for processing our food.