People with Parkinson's may be more likely to experience problems with their bowels (the small and large intestines) than the general population. To have Parkinson's and constipation is common but not everyone with the condition will have bowel symptoms and there are many effective ways to manage any problems that arise. 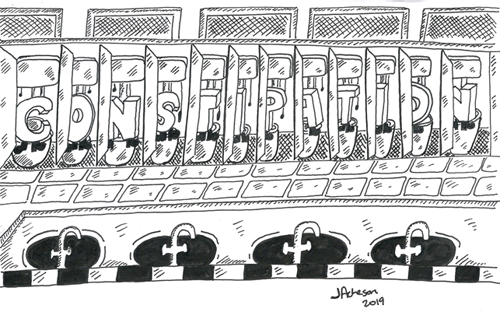 Constipation is a common health problem that affects our ability to make normal bowel movements. If you are constipated you may have:

Eating, drinking and exercise stimulates the passage of waste matter through the large intestine, so infrequent meals with insufficient dietary fibre and/or a lack of exercise is often the main a significant cause of constipation. However, constipation may also be caused by hormonal, neurological or anatomical factors, such as impaired muscle relaxation, or it may be a side effect of medication.

Although constipation may be embarrassing or a nuisance, in most cases it is unlikely to cause serious problems. But if symptoms are severe, it may make you feel unwell, nauseous or lethargic, and it can make older people confused and restless. Constipation may also make bladder emptying difficult, or emptying may become so urgent that incontinence results.

Bowel problems can occur in anyone, but some problems, especially reduced bowel movement or constipation, are particularly common in Parkinson’s. This tends to be as a result of slowness of movement (bradykinesia) and muscle rigidity, both of which are visible symptoms of the condition. But Parkinson's also muscles we cannot see – including the bowel muscles - which in turn causes a reduction or slowness of bowel movements.

Poor bowel function may be exacerbated if chewing and swallowing food is difficult, which is quite common in Parkinson’s. This may make it harder to eat a diet that is rich in fibre - for example fruit, vegetables and whole grains – which helps form soft, bulky stools and aids bowel function.

Exercise is also thought to play a role in efficient bowel function, but if Parkinson's makes activities more difficult, the bowel may be less stimulated and the intestines can become sluggish.

Constipation is thought to affect up to 65% of people with Parkinson's – the bowel symptoms may predate the neurological ones . Tremor and a fear of spilling drinks can mean some people unintentionally reduce their fluid intake which can make stools hard and more difficult to pass. When stools remain unpassed for a long time, they become harder as the body absorbs more water from them. If stools build up in the rectum they can become impacted and block the rectum. They may also overflow as lumps of stool or watery mucus.

Delayed gastric emptying (gastroparesis) is also common in Parkinson's, leading to a variety of symptoms such as feeling full quickly when eating, abnormal discomfort from bloating, nausea, vomiting, weight loss and malnutrition. It can also interfere with how effectively medications work.

Anxiety about bowel movements, possibly because of the effect of certain medications such as levodopa and anticholinergics, may also make it difficult to relax the body and muscles effectively to allow a stool to be passed, resulting in constipation. Parkinson’s itself can impair automatic relaxation of the pelvic floor which is necessary to straighten the last part of the intestine and allow the faeces to pass. This happens particularly during ‘off’ periods when medication is not working well.

Finally, diarrhoea may occur as a side effect of certain Parkinson’s medicines but this may be overcome by adjustments to the medication regime so it is important to mention any diarrhoea to your doctor.

The first step in dealing with bowel disorders is to talk to your doctor. He or she will probably review your medication to see if this is a contributory factor. Whilst it is usually possible to control any difficulties with diet, fluid intake and exercise, your doctor, or Parkinson’s nurse specialist if you have one, will be able to advise further, and may, for example, prescribe laxatives in severe cases of constipation. If you have any “alarm features” such as unintentional weight loss or rectal bleeding, then you may need to be referred for specialist assessment.

The following healthcare professionals can also advise on aspects of bowel care:

If diet, fluid intake and exercise do not control constipation, then laxatives may be helpful but they should be used with caution and only under the direction of a doctor as some may lose effect over time.

There are several types available, including fibre-based laxatives and ‘osmotic’ laxatives which draw water into the bowel and retain it there to soften and bulk up stools to make them easier to pass. One such example is Movicol®, a solution which delivers water to the large intestine to increase the bulk of the stool. This triggers the muscles of the bowel to contract and produce a bowel movement. The water in Movicol solution is not absorbed into the body so it can also soften and lubricate the stools to promote comfortable bowel movements.

It is crucial that, at first, your doctor checks regularly that the dose of any laxative is right for you. Once this is achieved, you will probably be able to maintain the right balance on a day-to-day basis, taking account of what you do and how you feel from one day to another.

When oral laxatives have not been successful, enemas (a liquid inserted into the rectum through a tube, usually with the aim of triggering bowel movement and the passage of stools) can be very effective in improving severe constipation.

It is easy to become obsessed with bowel activity, but it is not necessary to have a bowel movement every day – it can be quite normal for some people to empty their bowels only three or four times a week. What is important is that passing stools does not cause pain or unnecessary strain. Focus on what is normal and healthy for you and remember that bowel activity is affected by food and exercise, so will vary according to what you are eating and doing.

Remember that learning to manage your bowels will take time and patience, so don’t expect to solve problems overnight. It may take a few weeks to adjust diet etc, so be patient. There are also plenty of ways you can help yourself.

A healthy lifestyle will enhance bowel efficiency and increased fibre and fluid are key factors. However, too much bulk from fibre can increase constipation so the balance needs to be right – your doctor should be able to refer you to a dietician for help with this.

Any increase in fibre should be gradual to avoid flatulence (wind) or bloating. There are many ways in which you can increase fibre in your diet, including:

But if you feel unable to increase your fluid and fibre intake because of eating and drinking difficulties, you could try these practical suggestions:

However, you may find increasing your natural fibre and fluid intake does not relieve your bowel difficulties. If constipation is the problem, then medications such as bulk formers or stool softeners may help. Several products are available so ask your doctor or a dietician for advice.

Physical exercise may help in relieving or preventing bowel problems. Exercise can stimulate the bowel muscles and improve your ability to pass stools. It can also strengthen the pelvic floor muscles, which helps reduce constipation.

Going to the toilet

It is important to try to relax when going to the toilet. Try not to rush and make sure that you do not become too preoccupied with your bowels. If your feet do not touch the floor when sitting on the toilet, try putting a small stool under them so that they are resting on something and you are more comfortable. Try to ensure that this footrest does not slide on the toilet floor by choosing one that has a non-slip base (for example a Squat Easy®).Don’t sit on the toilet for more than about five minutes and don’t strain hard to pass a stool. Listen to your body, leave it for a while and try again later. If possible, try to pass stools when you are ‘on’ and medication is working well.

Unfortunately, failure by healthcare professionals to recognise those most at risk of developing bowel difficulties used to be a major stumbling block in managing the condition. This, coupled with the patient’s embarrassment in approaching the subject, meant that any problems often went undiagnosed or untreated for some time. Fortunately, most of those at risk are now identified early and preventative measures can be put in place to reduce the risk of complications. A proactive approach to treatment really can reduce the impact that bowel disorders may have.

Background: the stomach, Parkinson's and levodopa

Levodopa is not absorbed from the stomach, but the stomach plays an important role in controlling how levodopa reaches the parts of the small intestine where it is absorbed. Some medicines, including dopamine agonists and anticholinergics, can also delay gastric emptying, as can severe stomach acidity, although over-treatment of this problem can also prevent the break-down of levodopa tablets, leading to incomplete absorption.

Unfortunately, gastric emptying can be delayed by Parkinson’s itself or by constipation caused by the colon-gastric reflex. Levodopa tablets may remain in the stomach for a long time, leading to delayed absorption in the small intestine and a delayed response to the treatment.

An enzyme called dopa-decarboxylase that is present in the stomach lining can convert levodopa trapped in the stomach into dopamine, making it unavailable to the central nervous system. Also, dopamine formed in the stomach may stimulate gastric dopamine receptors, leading to stomach relaxation and reduced gastric motility, and this can worsen the problem.

We would like to thank Dr Anton Emmanuel (National Hospital for Neurology & Neurosurgery, Queen Square, London, UK) for his help in reviewing this information.

Dieticians and nutritional therapists advise on a healthy diet and specific dietary needs, including advice on maintaining a healthy body weight.

If you have been taking a Parkinson’s medication that contains levodopa for some time, you may develop some movement difficulties throughout the day.