Compulsive behaviour is when someone has an overwhelming urge to act in a particular way. This is usually out of character and the person may be unaware of their personality changes.

The motivation to act this way is usually the prospect of pleasure or reward, although compulsive behaviour may continue even when a person no longer derives any reward or pleasure from his or her actions. Such behaviour may harm the person or those around them.

An inability to resist the temptation to carry out certain activities is known as impulsive behaviour, or Impulse Control Disorder (ICD) 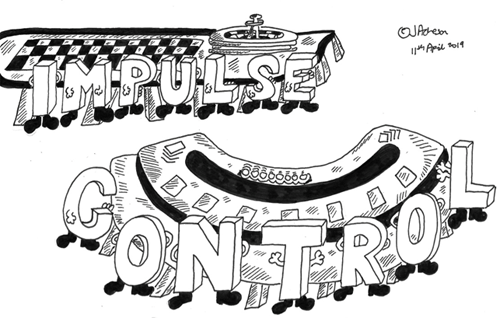 Compulsive and impulsive behaviour and Parkinson's

Impulsive and compulsive behaviour is related to dopamine levels in the brain. Dopamine is the chemical messenger in the brain that is primarily affected in Parkinson’s. As well as helping to control movement, balance and walking, dopamine also plays a big role in the part of the brain that controls reward and motivation. This is important, as people affected by impulsive and compulsive behaviour are driven or motivated to do something that gives them an instant reward. Some research suggests it is the anticipation of reward that is the driving factor, rather than the reward itself. For example the act of gambling and a potential win is more exciting than the win itself, which is why the behaviour is repeated.

Certain medications are thought to be linked to compulsive and impulsive behaviour, in particular dopamine agonists and, in some cases, levodopa. It is estimated that 17% of people taking dopamine agonists experience some degree of compulsive or impulsive behaviour whilst approximately 7% of people taking levodopa and other types of medication are affected1. The mechanism between medication and changes in behaviour is not yet clear and is likely to vary as individuals each respond differently to a particular medication. However, stimulation of D3 receptor sites, as witnessed in other psychiatric disorders, might be one explanation as its involvement in mediating the incentive motivational effects of other drugs is recognised.

It is important to emphasise that not everyone will experience unwanted behaviour. This is still relatively uncommon in Parkinson’s and you should continue taking your medication as prescribed. As always, it is important to monitor any change in behaviour when medication is altered or prescribed, so that adjustments can be made if necessary.

In some cases, changes in behaviour can be positive too, such as a renewed interest in a hobby or sex. In addition, some behaviour can be managed, for example limiting the amount of money available for someone to gamble with. Nevertheless any change should be reported to your nurse or doctor.

Factors that are thought to make a person more likely to develop compulsive or impulsive behaviour include: young onset of Parkinson’s, a history of depression, a family history of drug or alcohol abuse, being male, single or living alone.

Types of compulsive of impulsive behaviour

The most common types of behaviour in Parkinson’s are:

The following terms are sometimes used to differentiate between the types of behaviour related to dopamine replacement medications:

Because of the sensitive or private nature of some behaviour it is not easy for family or friends to discuss this with the individual. The person may feel embarrassed or uncomfortable discussing the problem so they may need reassurance that their behaviour does not reflect badly on them and that they can talk in confidence with a healthcare professional.

The person may be unaware of their personality changes so it is very important that family and friends who observe unusual behavioural traits discuss this as soon as possible with their doctor or an appropriate healthcare professional. Although it can be difficult to tackle such sensitive issues, prompt action can usually find effective treatment.

A trial and error approach may be needed as the higher doses of Parkinson’s medication required to control motor symptoms may be the cause of the compulsive behaviour. But reducing medication can mean motor symptoms are less well controlled.

Treatment may involve reducing the daily dose of Parkinson’s medication, or withdrawing dopamine agonists in favour of levodopa or another type of medication. Any changes should be made gradually to minimise the risk of side effects or withdrawal symptoms such as anxiety or depression. Continuous dopaminergic stimulation (CDS), using levodopa/carbidopa or apomorphine for example, has been found to be effective for a number of people.

Depression or other mental problems may increase the likelihood of unwanted behaviour emerging so it is also important to get a mental health assessment from a qualified professional. If appropriate, counselling may help or antidepressant medications may be prescribed, particularly if any hallucinations or paranoia are also present. A course of psychotherapy may also be successful in some instances.

Amantadine has also been assessed as a potential treatment for ICDs. Further research is needed to define more precisely how amantadine may influence the development and treatment of ICDs in Parkinson's.

How family and friends can help

Family and friends may often notice unusual behaviour that the individual is unaware of or tries to keep secret, unaware in many cases of the impact such behaviour can have on those around them. Some of the signs to look out for include:

Family and friends can also help by controlling the opportunities for compulsive behaviour, perhaps by creating opportunities for other activities to divert attention, by blocking Internet gambling sites or by taking away credit and bank cards so cash flow is restricted.

Because compulsive behaviours often cause problems in family life and social adjustment, family therapy may be advised.

We would like to thank Jane Mills (CNS in Parkinson’s at Princess Royal University Hospital. Kings Healthcare, Farnborough, UK) for her help in reviewing this information.

Parkinson’s will affect the daily lives of family and friends too. How much you decide to tell those close to you, and how much you want to involve them in the early stages is a personal decision.

As a carer, maintaining a positive frame of mind, together with understanding potential stressors and how to manage them, can make a huge difference to how you cope with your role.

People who develop Parkinson's will most likely need medication for the rest of their lives. Today, the symptoms of the condition can be very effectively relieved through medication.