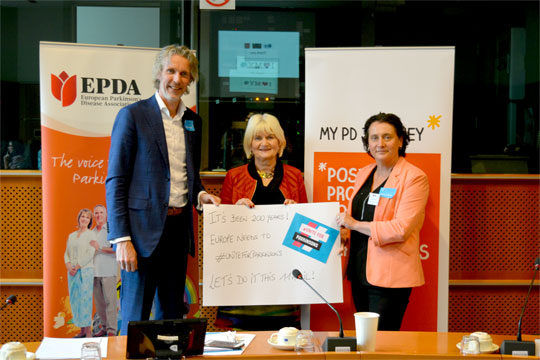 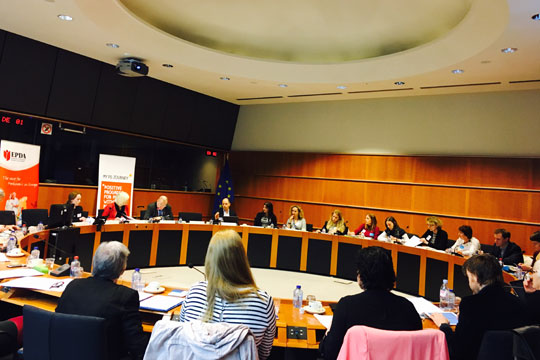 Parkinson's Europe working with its partners at the European Parliament in March 2017.

Why is Parkinson's Europe involved in political advocacy?

Parkinson's Europe believes that much more can be done to overcome key hurdles to effective diagnosis, treatment and care at the European level.

As such, one of Parkinson's Europe's strategic aims is to increase political awareness of Parkinson’s as a priority health challenge at the European and national levels, and build political support for concrete policy change.

Parkinson's Europe actively engages with EU decision makers, partners and stakeholders to promote dialogue on policy gaps that negatively affect people with Parkinson’s and their families, and to collectively advocate for long-lasting change.

Read about our policy priorities in more detail in our political manifesto.

Our EU advocacy goals for 2022

EU health policy rarely made headlines prior to the Covid-19 pandemic, but since 2020 the EU’s role in public health and crisis response has been thrust into the limelight. While health policy remains the responsibility of the Member States, according to Eurobarometer data, 66% of EU citizens want to see more EU responsibility in health crises.

There are several EU health policy developments expected in 2022 that could have a real impact on the Parkinson’s community. In anticipation of these, Parkinson's Europe's Parkinson’s Advocacy Group (PAG) has identified three priority work streams that will be at the heart of our advocacy work this year:

Pesticides have been linked for decades now with Parkinson’s as rural areas and farmers in particular, have experienced higher rates of the condition. Yet only Italy and France recognise Parkinson’s as an occupational disease as a direct consequence of working in the field, leaving others struggling for recognition and compensation. At the EU level, the use of Glyphosate is currently under consideration by the relevant authorities but has not yet been banned.

Parkinson's Europe's PAG recognises the importance of this issue and will work this year to ring the alarm bell and position Parkinson's Europe in EU-Brussels as the voice of the Parkinson’s community that will champion people’s health and safety.

For the first time, the European Commission has announced it will take targeted action on neurological diseases as of 2022, under an initiative on non-communicable diseases (NCDs) entitled ‘Healthier Together’. The goal of this initiative is to support EU Member States to implement actions to reduce the burden of NCDs, and it is supported by a considerable budget from an EU research programme called EU4Health.

Parkinson's Europe's PAG is ready to seize hold of the fact that the EU is finally taking action on NCDs and neurological diseases by positioning Parkinson's Europe as a thought leader, ensuring that Parkinson’s is given the attention it deserves and that best practices from our member organisations are highlighted.

At the end of 2022, the European Commission will put forward a proposal to revise the existing legislation governing the pharmaceutical industry in Europe. The Commission has identified a number of “potential weaknesses” in the basic pharmaceutical legislation that are standing in the way of innovation and competition. This is therefore a key opportunity for Parkinson's Europe to influence the rules that currently govern medicines that impact on the lives of people living with Parkinson’s.

Parkinson's Europe's PAG will work to shape the pharmaceutical legislation in a way that makes life better for people with Parkinson’s – for example, by campaigning for equal access to medicines across Member States, securing more affordable medicines, and addressing medicine shortages, not only in times of crisis but also long term.

At the European level, Parkinson's Europe works closely with a number of other European patient organisations to advocate for a more robust policy response to Parkinson’s. Our partners include the European Patients Forum (EPF), the European Federation of Neurological Associations (EFNA), the European Brain Council (EBC), and Eurocarers. Our collaboration efforts focus on collectively strengthening and raising the patient voice within EU policy making. We co-produce position papers on important issues, participate in projects that explore individual challenges that affect people with Parkinson’s and their caregivers, and put forward solutions to EU decision makers.

We received 33 responses from policymakers, and the answers revealed a worrying lack of knowledge and understanding about Parkinson’s. This means that the first step in any of our advocacy work with policymakers going forward will be to educate and inform. You can find the survey report here.

Parkinson's Europe has been involved in a number of Parkinson’s-related EU-funded projects that are focused on technology-enabled diagnosis and disease progression, including iPrognosis and TreatER.

Parkinson's Europe's Parkinson’s Advocacy Group (PAG) was launched in 2021 as the driving force of Parkinson's Europe's advocacy work. The PAG is made up of both Board members and nominated representatives from the national organisations (MOs) and has a membership of up to 11 persons.

The creation of a dedicated group within Parkinson's Europe to focus solely on advocacy was an important step given the important developments on the EU policy horizon in the coming years. The group’s working methodology is based on transparency, cooperation, and a desire to both learn and to educate.

The PAG's objective is to assess what are Parkinson's Europe's priorities, campaigns, and deliverables in relation to Brussels-EU policy and legislation. Meetings are held virtually every 6 - 8 weeks to discuss current and future developments and track progress against objectives, particularly on the three priorities outlined above.