Survey on awareness about advanced Parkinson’s

By collecting this data, we aim to understand people with Parkinson’s perception and knowledge about treatment options, especially focusing on ‘advanced’ Parkinson’s. In particular, we aim to understand if people with Parkinson’s receive timely and adequate information about advanced Parkinson's therapies from their healthcare professionals. The responses we obtained from this survey will help us in our efforts of supporting the Parkinson's community get the right information at the right time.

The survey was closed on 31 January 2022 – thank you very much to those who have helped us collect data about this important topic.

Results of the survey were published in a virtual poster that was presented at the 8th Congress of the European Academy of Neurology, 25th–28th June 2022, Vienna, Austria, poster EPV-538. These results show that people with Parkinson’s are most satisfied with their treatment if they feel that they have received satisfactory input from their healthcare professional. If you want to know more, please read a press release that was published about the results, or contact francesco@parkinsonseurope.org.

This data collection project is supported by and developed in partnership with Britannia Pharmaceuticals Ltd.

Survey on drooling (sialorrhea) in Parkinson's

In October and November 2020, Parkinson's Europe carried out a survey focused on drooling (sialorrhea) – a very important yet often-overlooked Parkinson’s symptom.

Thank you very much to all who completed this survey. The results demonstrate how much of an impact sialorrhea can have on people with Parkinson’s – not just on swallowing itself but also on quality of life and communication. They also show that a large percentage of people have not discussed this important symptom with their healthcare professionals – and have therefore not received suitable advice about the possible treatment options available.

Click on the image below to download a full report including all the survey findings, as well as important recommendations and advice on how to manage your sialorrhea if you have Parkinson’s: 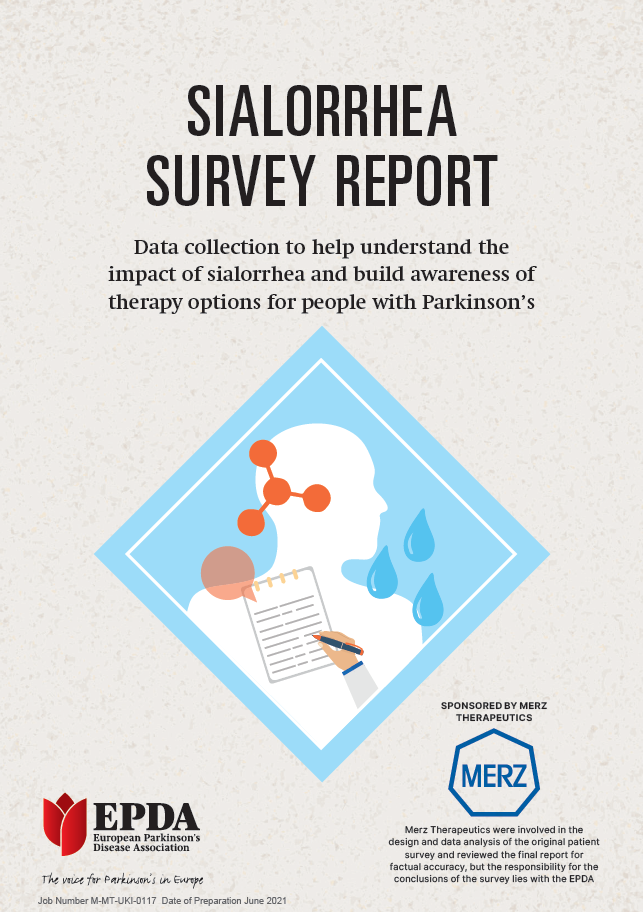 Neurologist Dr Bruno Bergmans and speech-language therapist Veronica Clark, who collaborated in the development of this report, strongly recommend that anybody experiencing sialorrhea discusses their symptoms with their neurologist and/or with a member of their multidisciplinary team – they will be able to ascertain whether there is a link with Parkinson’s and propose any treatment options available. It will also be important to be referred to a speech therapist as soon as possible as they will be able to help with the sialorrhea as well as with any related swallowing difficulties.

If you have any questions about this project please contact francesco@parkinsonseurope.org.

This data collection project is supported by our partner Merz Therapeutics.

European survey on the challenges of Parkinson’s carers

In a pan-European survey carried out in 2019-2020, carers from around Europe have provided their views about the kind of impact caring for a person with Parkinson’s has on their lives.

It reveals that policies, health systems and society at large are not doing enough to support this group of people which provide vital care to people with Parkinson’s.

The survey was available in 14 European languages and aimed at carers of people with Parkinson’s with a broad European scope.

An abstract and a poster displaying the most important survey results were presented at the MDS Virtual Congress 2020.

A full report outlining the results of the survey, including an analysis of data and key recommendations, was published in June 2021 – click here to download it.

Read more about this project and, if you have any questions, contact francesco@parkinsonseurope.org.

This data collection project is supported by our partner Air Liquide Healthcare.

Parkinson's Europe has been supporting a new survey project about people with Parkinson’s experience of working life and employment around the time of their diagnosis. The survey is part of a research programme exploring the economic impact of Parkinson’s on national healthcare systems and on society as a whole, with the aim of advocating for earlier, and better, services to support people soon after their Parkinson’s diagnosis.

The research project is being carried on by researchers at Oxford Brookes University (UK), in collaboration with the European Parkinson’s Therapy Centre (EuPaTh, Italy), who developed the background research work as well as the survey questionnaire.

The survey, open to everyone who has been diagnosed with Parkinson’s, was open from April to October 2019. The survey results have been developed into a MSc thesis – an abstract of which is available for download below. The full thesis, as well as a publication in an academic journal, will be available later in 2020.

Thank you to everyone who took part to this important research project. Please note that Parkinson's Europe has been supporting this project as a dissemination partner only; Parkinson's Europe has not been involved in developing the survey. If you have any questions, please contact Prof Helen Dawes and Dr Johnny Collett at mores@brookes.ac.uk.

In July 2018, Parkinson's Europe, in partnership with long-term industry partner UCB, created a short online survey to better understand some of the issues people with Parkinson’s and their families/carers across Europe face on a daily basis.

Two thousand people from more than 20 countries took part in the survey, which was live until 19 October 2018.

We hoped to gain unique insights from the Parkinson's community, that would help us understand:

A report displaying the results of the European survey is available for download below. The analysis of the answers will be used to design and propose solutions that will help us to campaign for improvements in healthcare management and enhance people’s everyday quality of life.

Parkinson's Europe would like to thank UCB for its extensive support throughout the entire data collection project, and everyone who took part by answering the survey.

If you have any questions about the survey, please email us.

The European Inventory, the first phase of our multi-stakholder initiative My PD Journey, was carried out between the end of 2014 and beginning of 2015.

This research project was designed to identify gaps in Parkinson’s care and seek out national examples of good practice that could be adopted in other regions. It was completed by an independent research organisation and launched in Brussels in April 2015.

The research consists of primary (qualitative and quantitative) and secondary evidence across 11 countries.

I want to know more

Parkinson's Europe's Move for Change data collection project was carried out between 2010 and 2013, and is the largest online European patient survey on standards of care in Parkinson’s to date.

The three-part survey – featuring responses from people with Parkinson’s and carers from 35 European countries – was designed to identify areas of care falling short of the standards set by current clinical guidelines.

The results of the survey are available in a number of formats throughout this section of the website, but a great place to start is to download the booklet.

The booklet contains the key European results, which have been presented in easy-to-understand infographics.

The first Move for Change online survey (2010) determined whether people with Parkinson's across Europe were being “referred to a doctor with a special interest in Parkinson’s” and “received an accurate diagnosis”.

You can read the full results from Part 1, which were published in the European Journal of Neurology.

The second part of the Move for Change survey (2011) determined whether people with Parkinson's across Europe had “access to support services”.

You can read the full results from Part 2, which were published in the European Journal of Neurology.

Part 3: Continuous care and taking part in managing your disease

The third part of the survey (2012) determined whether people with Parkinson's across Europe were “receiving continuous care” and “taking part in managing their illness”.

You can read the full results from Part 3, which were published in the European Journal of Neurology.

Parkinson's Europe carried out its Occupational Therapy Survey from 2008 to 2009. The survey evaluated the contribution occupational therapists make to the management of Parkinson’s on a daily basis.

The survey was translated into Norwegian, Swedish and Slovenian, and the results were published in the European Neurological Journal.

The Real Life, Real PD Survey was a patient survey conducted across 31 European countries in 2007-08, supported by pharmaceutical company GlaxoSmithKline.

It focused on the realities of living with Parkinson’s both ‘day and night’, asking questions surrounding difficulties with daily activities such as eating and dressing, mood and possible impact on relationships plus sleep disturbances and emotional well-being. Almost 3,000 people from across Europe participated in the survey.

The Participation in Life Survey questioned nearly 7,000 people with Parkinson’s in 14 countries worldwide in 1998-99. It asked a range of far-reaching questions relating to the physical symptoms of the disease, problems associated with their treatments and emotional and psychological problems.

The Global Parkinson’s Disease Survey was, at the time, one of the largest surveys ever conducted on Parkinson’s. Carried out in 1997-98, it provided an in-depth and rigorous investigation into the factors affecting a person with Parkinson’s health-related quality of life.

It was a large, international and randomised survey that included perspectives from clinicians, patients and carers from six countries across three continents (Canada, Japan, Italy, Spain, the UK and the US) that had similarly developed health systems. Parkinson's Europe enrolled nearly 2,000 respondents: 203 clinicians, 1,020 patients and 687 carers.

The survey’s principal aims were to improve on the limitations of previous studies in order to better investigate and understand the factors that influence quality of life, and to identify those elements of disease management that have the greatest effect on the quality of life (in addition to disease stage, related disability and anti-Parkinson’s medication).